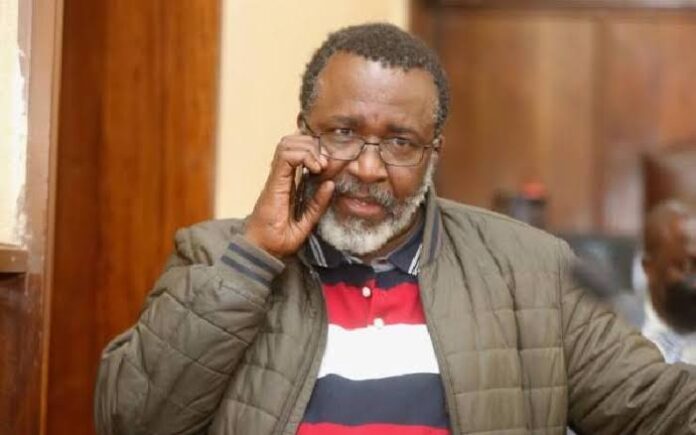 Linturi, together with the Agro-Chemical Food and Company Limited’s Board Chair Mr Mohamed Bulle and the suspended Ag Managing Director Mr Timothy Ogwang’ have been convicted for being guilty of contempt of Court Orders of 30th June, 2022.

Mr Justice Anthony Ndung’u of the High Court in Nairobi, today while convicting then further Ordered that the three (3) convicted contemnors personally appear in Court on 21st February, 2023 for sentencing, which may include a possible jail term, or a cash fine to be paid from their personal resources or both.

The three are also liable for removal from office and a bar from assuming appointive or elective public office under the provisions of the Leadership and Integrity Act as read with Chapter six of the Constitution.

The case filed by Lawyer Wilfred Lusi, of CM Advocates, LLP on behalf of The Mehta International Limited, is challenging the implementation of what they have described in Court papers as an unreasonably biased, unlawful, and unfair administrative decision by the CS, for Agriculture taken contravenes his authority, and in blatant disregard of the Companies Act and various enabling laws.

Mr Lusi further argues that If unrestrained, the CS’s impugned administrative action stands to not only arbitrarily disposes his Clients of their lawful property, but also grossly interfere with the operations at the Agro-chemical and Food Company Limited (ACFC) exposing the company to management uncertainties which is likely to lead to shareholders value and loss of business, and consequently lead to employees losing their gainful employment and their livelihood, as well negatively impacting the general populace residing within the Muhoroni area and who depend on ACFC.

Mr Lusi accuses the CS of basis the impugned administrative action on a gross misapprehension and misapplication of the law and material facts.

On 30th June, 2022, after the matter had come up on numerous occasions before the Judge, the Court directed that the Respondents allow Mehta International Limited and Mr. Ashok Agarwal resumption of responsibilities as the Technical adviser/Manager, and Resident Director/Chief Executive Officer of Agro Chemical and Food company Limited, respectively, together with all necessary facilities to perform their positions; as was the case immediately before the impugned administrative action reposed in the letter dated 8th November, 2021 and referenced MOA/ADM/1/24/VOL.V.

According to Lawyer Lusi, the three, in what appears to be a total disregard of the Court’s orders, have refused to comply and give effect to this Ruling, with Mr Ogwang’ holding onto the office of Ag MD, and Mr Bulle leading the Board to defy the Court’s Orders.

“Previously Mr Justice Antony Mrima had sentenced the former DCI, Director, Mr George Kinoti to 6 months’ imprisonment at Kamiti, which jail term he is yet to serve on account of a pending appeal at the Court of Appeal “he adds.