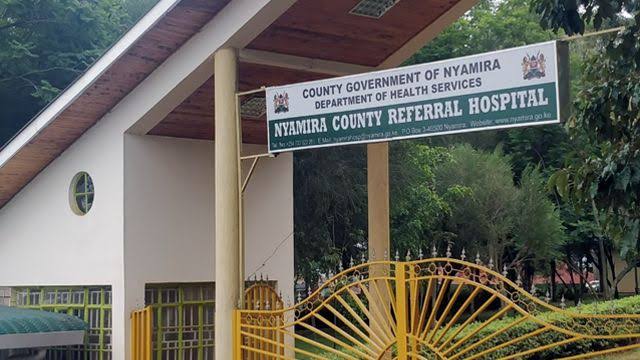 Two victims of the South Gem violent by-election have been abandoned at Jaramogi Oginga Odinga Teaching and Referral Hospital (JOOTRH) in Kisumu.

The two were referred to JOOTRH from Siaya County Referral Hospital on December 10, 2022 but have since been left to survive on painkillers.

Six others were treated and discharged following the December 8, 2022 melee that ensued outside Kambare polling station.

David Ouma Juma and Kevin Omoro, who say that they had been recruited by handlers of governor James Orengo to offer security on poll day, fear that they could get paralysed if not operated on in good time.

Juma told the Star that he had been tasked to hire a car and engage his colleagues to do the work and would be paid Ksh2,000 at the end of the day.

“Governor Orengo promised to pay our medical bills but I don’t get any positive response every time I reach out to his people. Nothing has been done to treat me yet I should be fitted with an implant,” Juma told the Star.

He added: “Hao ndio walituita hio kazi so wakapromise wata take charge of medical bill and operation. They dump me kwa hosi niko Russia Kisumu; no one is coming to my attention.”

(They are the ones who called us to do that job and promised to foot medical bills. They have dumped me in Russia (JOOTRH) hospital in Kisumu. NO one paying attention to my condition).

The implant will require a major operation to Juma’s waist (pelvic bone) which was fractured during the car accident.

According to Juma, he was hired to offer security by a handler of the governor whom he identified as Nyonje and Onyando.

Following the accident, two other friends of the governor, whom he identified as Obwolo and Caro, arranged for their transfer from Siaya to JOOTRH.

Obwolo, Juma said, promised them that the referral to Kisumu was being done by the order of governor Orengo.

“Obwolo would later report to me that the governor had left Kisumu City Manager Abala Wanga to handle our case,” Juma explained.

Juma said that he has also reached out to Kisumu City Manager Abala Wanga who had initially indicated that he would purchase the required implant by January 4, 2022, but in vain.

Abala is an elder brother to Polycarp Wanga who was the unsuccessful ODM candidate in the mini poll, and whom governor Orengo was backing his bid.

“Obwolo said that Abala was to purchase the required implant. When I sent someone to Abala, he said that I should stay calm as he would buy the implant,” Juma said.

Abala promised to bring the implant by January 4, 2023 and has since “blocked” his phone number.

Juma said he then re-approached Orengo’s personal assistant Fred Ojode who has been promising to pay them a visit at the hospital since January 4.

“Whenever I call him (Ojode) he says that he is coming to pay us a visit. But he is still on his way coming to Kisumu since January 4,” Juma said amidst sobs.

Juma, who hails from Alego in Siaya (with roots from Ugenya), said that he is the breadwinner in his family and the family is now starving.

“I am a father of two. My first born is in class one and the other one is still an infant. It is my father who is currently trying to provide for them.”

Since the tragedy, Juma reported that “we have been surviving on painkillers.”

Reached for a comment, Orengo’s communication director Benjamin Agina, did not know of any such agreement between the victims and his boss.

“Is there somewhere written that the governor was to foot the bills?” he asked the Star on phone.

Agina directed the Star to talk to Abala Wanga.

Reached for a comment, Abala was not returning phone calls or SMS until the time of going to press.

On his part, Polycarp Wanga, who was the candidate, equally demonstrated his lack of understanding of the two patient’s distress.

He said that he didn’t have an understanding of the word abandonment, as was reported by Juma, and that “I think there are guys who are in Russia (JOOTRH).”

Nonetheless, Wanga told the Star that someone whom he did not want to mention (understood to be Abala) was in-charge of the issue and that, him, he was busy following up on his election petition.

The election petition against the by-election winner Brian Anyango alias Otuom Polo has since been filed at the Siaya Law Courts.

“I am the candidate, yes but, first, I have to consult the person who he (Juma) was answerable to. Why don’t he communicate to the guy he has been communicating with?”

Wanga further claimed that his political opponents could be using the patient to soil his name.

“I also have political rivals who might be using him,” Wanga claimed.