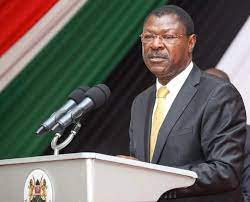 There is a looming rebellion in Ford kenya party by members and party officials against party leader Hon Moses Wetangula over lack of employment opportunities that he strongly promised them during the campaigns.
Members  have expressed their frustrations while accusing him of failing to push for their thirty percent share in government that would have enabled most of them to get jobs.
” Hon Wetangula is not pushing anything for us and is currently disconnected from the party,’ said a member who didn’t want to be mentioned.
Members further accused CS Susan Nakhumicha ,who came from the party, of employing non members of the party and leaving out people who have really fought for the party.
They wondered whether  Hon Wetangula made the right choice as far as her appointment was concerned.
The members have therefore decided to call for a press conference and call upon president Ruto to honour the coalition agreement that made them to vote for him or they begin chatting a different path for the next general election.
Our effort to get the party secretary general Dr Chris Wamalwa to respond to these allegations was unfruitful. Our calls to the organizing secretary Chris mandu and his deputy David Burare went unanswered.