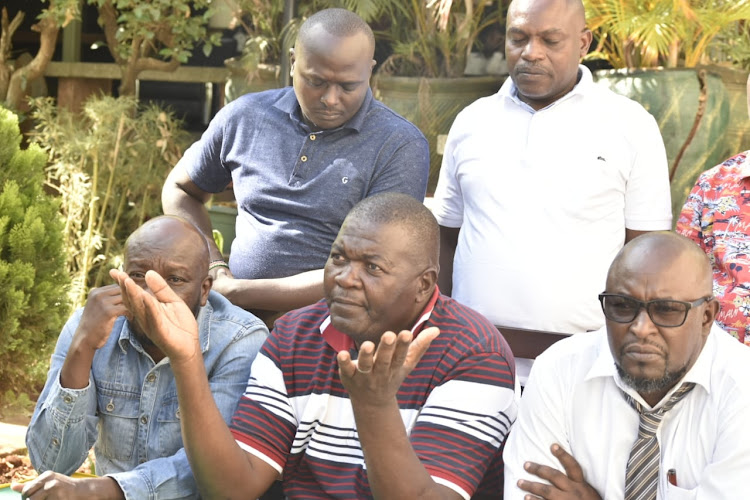 Various Nairobi Members of the County Assembly from the UDA party are at war with each other over Governor Johnson sakaja’s governance.

Speaking on Wednesday, MCAs supporting Sakaja accused some members of its leadership at the county assembly of being funded by cartels to fight Sakaja.

Kayole Central MCA Jeremiah Themendu claimed that a sweet deal had gone sour between some members of the UDA assembly leadership and Sakaja.

“The deal was not fruitful hence the beginning of the “war with the Governor,” he said.

Themendu revealed that the MCAs followed Kiragu blindly to a point where they were mobilized not to attend the vetting of Chief Officers.

Defending the county boss, Kahawa West MCA Clement Kamaru noted that Sakaja was the governor for all and not a particular side.

“I’m an elected UDA MCA but does this mean I won’t serve the Azimio supporters in my ward,” He said.

“Our party leader and President are very clear on the manifesto. Baseless accusations and fighting Governor Sakaja is wasting time,” he added.

On Tuesday, Kiragu and Mugambi accused the Governor of being biased against his own Party, UDA.

It was not the first time the MCAs have accused the Governor of “leaning” and consulting the Azimio la Umoja coalition more than the Kenya kwanza side.

The UDA leadership claimed that Sakaja was forcing a handshake between Opposition leader Raila Odinga and President William Ruto.

“We have heard the Governor saying he will facilitate a handshake between the President and Raila, yet he clearly knows Ruto’s stand on the issue,” he said.

Kiragu claimed that Sakaja was more concerned with working with the opposition than respecting Ruto’s wishes who is also the UDA Party leader.

He claimed that Sakaja facilitated the Azimio Rally held on Monday at Kamukunji grounds.

Governor Sakaja has however not responded to any of the accusation