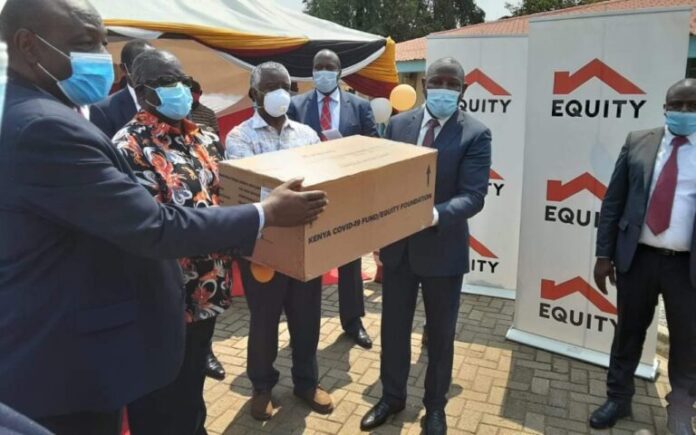 A highly placed source in the current regime detailed how the officer, in his own personal capacity, became one of the main beneficiaries of looting that took place in the County during governor Awiti’s two term in the office.

He reportedly encouraged dubious transactions in exchange of kickbacks and tender contracts with the former regime.

Apparently, governor Gladys Wanga who is trying to clean the mess created by her predecessor appears to have ignored dealing with Equity, ostensibly due to the financial institutions past bad records created by Omino.

The revelation comes at a time of bitter fallout between top officers in governor Wanga’s government and those who served Awiti over what is termed as betrayal by Wanga to honour some of her promises.

A source who is close to Wanga said, many would be surprised by the magnitude of Omino’s role in Homabay corruption.

Consequently, another source also in the current regime challenged Equity bank management to conduct an independent investigation regarding the allegations.

Omino could be a person of interest to the EACC as far as unravelling the County’s corruption saga is concerned.

Insiders familiar with his operations claim that the officer had perfected the art of double his company with his own personal interests while conducting business with the county government.

This had led to a bitter fallout that has seen Equity bank missing deals in the current regime.

There’s is an existing bad blood between Omino and some of the local elected leaders, something that is also impacting negatively on the financial institutions