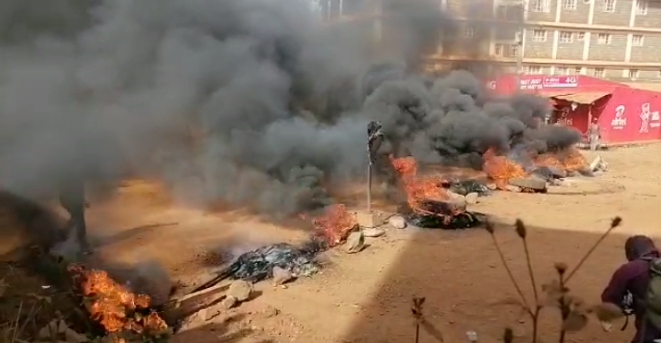 There were angry scenes at Nyamataro in Kisii after the residents staged violent demonstrations on Monday to protest delay by a contractor to finish work on some part the busyKisii – Kisumu Highway.

The 1 kilometer stretch has remained undone for more than two years after the Chinese Contractor walked out.

The residents told journalists that their anger had been fanned the more following billows of dust swirling into the shops and residential houses.

By 10 Monday, there was still a huge traffic snarl up along the highway.

Ignatius Moi, a resident said there is need that water be sprinkled to tame dust as they wait for the contractor to do the tamarcking.

Travellers heading to Mosocho, in a Kitutu Chache South and Kisumu lamented delay to reach to their destinations following the demos.

The dust has since sparked the closer of several businesses at Nyamataro.

“What we are demanding is one, the sprinkling of water be done three times a day or tamarcking be done as soon as today,” he told reporters.

A local drug store was closed by the Pharmacy and Poisons Board on Friday for the dusty, Moi said.

Meat sellers and other roadside traders sellers have suffered the most being a dry spell.

” Our appeal to the national government is to fund this project and ensure it is done, we are not going to rest we have suffered enough,” said Florence Bosire, vegetable seller

A few police officers sent to quell have since withdrawn to safety as protests continued unabated.