A D plain grade that made Eldoret businessman a millionaire 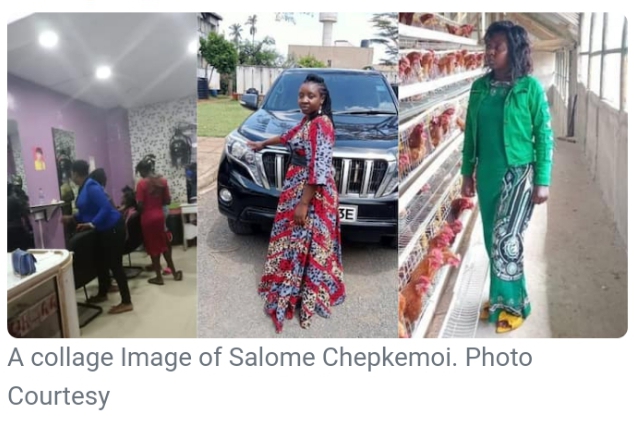 Many times that we are told that Education is the key to success and a bright future but what happens if one does not succeed in class? For Salome Chepkemoi this is not the case even though she started her life off on a low note scoring a D in her KCSE exams.

Her father rejected her when she became pregnant in form two, this was the beginning of what she described as a dark patch in her life. The 28-year-old went ahead and scored a D plain in her 2012 KCSE exams.

From the outside, it appeared as though her fate had already been determined, but much like a seed that had been planted in good soil, she grew and improved her life.

In one of the interviews, the 27-year-old entrepreneur revealed that she fled home and got into a world of hustling. She began working in a boutique where she received a modest commission for each client she served, she also trained herself essential business skills.

Salome eventually opened her own tiny boutique in the estate using the skills she had learned and the money she had saved.

Unexpectedly, one of her friends volunteered to let her take over the company she had been running in Eldoret town as she was about to depart for abroad.

Salome claims that after paying a small amount as goodwill, she continued to pay the property’s rent much like the previous tenant. Salome’s endeavor prospered quickly after she took over the company, enabling her to establish a second branch.

She currently manages the two boutiques in addition, she has invested in chicken farming, which she uses to provide wholesale eggs to Eldoret.

Salome now has a home, drives two cars, and works hard to operate her thriving enterprises.